In 1971 the committee of the Midland boxer Club decided to try and resurrect the East Midlands Branch of the Midland Boxer Club. I was persuaded to take over the position of Secretary. The branch only ran monthly match meetings. We have had several ‘Headquarters’ but finally settled at the Black Horse, Somercotes over ten years ago.

As a Branch we were invited to run several Open Shows in our area, with great success. It was decided by our committee that we should aim a little higher and try to establish our own Breed Club. We were formed in 1984 and ran two Shows one being New Year’s Day and our Championship Show on the first Saturday in October held at The Lady Eastwood Hall, Notts, Showground, Newark, just off the A1.

All our shows are duly recorded with photographs of all the class winners and details of the show in an album, this causes quite a corner of nostalgia at all our shows, this idea was given to us by an overseas judge, Mr H Wittekoek, who judged a show held in conjunction with Eastwood Kennel Association when we were a ‘proposed’ club.

We ran our first championship show in 1991, and have run six successful championship shows, with entries of over 300 dogs. We are now on a rota system with two other clubs and this year is our non championship year. The committee agreed that we had to make this an exceptional show, offering prize money of £1,000 and a choice of two judges, one an overseas breed specialist and an ‘all-rounder’. We booked our usual venue and date. We hope that we have all the necessary ingredients to make this a show to remember.
p.s. Not forgetting our usual ingredient 'Martin’s Raffle' 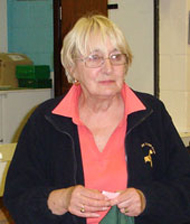